On Monday 13th January 2020, we held the first-ever London Children’s Food Insecurity Summit in partnership with the Food Foundation and the Greater London Authority.
.
The event put young Londoners at the forefront of food policy issues and explored the barriers and opportunities to protecting children’s nutrition and the actions stakeholders can take to support the agenda.

It also found that half (49%) of parents with children experiencing food insecurity are socially isolated. Sixteen percent of parents from food insecure households reported being unable to provide balanced meals for their children, and 9% said their children did not always have enough to eat. These figures could increase if food prices rise following the UK’s departure from the European Union. “Every child has a right to food, it’s not a privilege”
– Young Food Ambassador, Rockmount Primary School 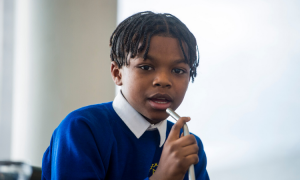 On Monday 13th January 2020, we held the first-ever London Children’s Food Insecurity Summit in partnership with the Food Foundation and the Greater London Authority. . The event put young Londoners at the forefront of food policy issues and explored the barriers and opportunities to protecting children’s nutrition and the actions stakeholders can take to support the agenda.

“Ensuring that children have a healthy, active and positive start to life is of critical importance to the well-being of everyone in our city and we know that grassroots community organisations play a significant role in this area. We’ve seen what happens at the front-line when people go hungry, and have learned a lot through

We teamed up with The Childhood Trust and BGC Partners this month to take part in a public-facing campaign called The Summer Give to help raise funds for Kitchen Social. The campaign ran from Monday 11 June – Monday 18 June and during this week, all donations made to participating charities were doubled. We’re delighted