Our new report on social mobility is launched at City Hall

In partnership with leading global management consulting firm, Oliver Wyman, today we launched ‘One City, Two Worlds’, a new report that shows London has a broken path to social mobility. 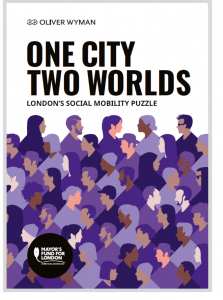 Through a new review of multiple datasets and by conducting extensive interviews, ‘One City, Two Worlds’, reveals that, despite significant success in education, young Londoners from low income backgrounds are less likely to move into professional or managerial jobs than young people in any other English region – 17% compared to 30% nationally. This is despite educational attainment being higher in the capital and a narrowing of the attainment gap between pupils eligible for free school meals and their more affluent peers.

This is matched by data showing that the London job market continues to favour the privileged, with those from more affluent backgrounds occupying 54% of the capital’s highest skilled jobs. This has resulted in more than a quarter of young people from low income backgrounds in London believing ‘people like me’ do not succeed in life.

The report also highlights the “London Doughnut Problem”: a situation where more high value jobs and opportunities are in London’s core districts, whereas the outer boroughs are facing higher levels of poverty. There are notable gaps in statutory and non-statutory support in certain pockets of the outer ring of the London doughnut. Among the boroughs with the greatest levels of child deprivation, inner city councils appear to receive more funding for youth provision than their peers on the periphery.

Impetus for the research came from concerns that national reports and indices have consistently over reported the social mobility picture in London, with regional data masking deep levels of poverty and inequality. In addition, the national narrative has under-recognised how the magnet effect of London has created a uniquely competitive labour market, preventing young Londoners from low income backgrounds without the networks or resources to access higher status careers.

To tackle the broken ladder of social mobility, ‘One City, Two Worlds’ proposes a system overhaul, and calls for a better co-ordinated approach to create a ‘cradle to career’ pathway, which would include better use of data to direct support and funding decisions. The report also emphasises that the potential for immediate impact lies in the hands of corporate London who have an important role to play in placing socio-economic diversity at the core of their workforce strategies. Practically, this translates into more employability support in outer London boroughs, helping businesses adapt both their hiring and staff development policies, and increasing mentorship and role model schemes.

To challenge the established narrative that London is a ‘social mobility engine’ for young people, we brought together London businesses, charities and public sector organisations at City Hall to consider the findings of the report and introduce our recommendations. The event also saw some thought-provoking presentations and a panel discussion featuring: Manny Hothi, Policy Director, Trust for London; Kate Smith, Head of Corporate Strategy & Performance, City of London Corporation; Honey Sanusi, Citizenship Manager, Herbert Smith Freehills; and our very own Youth Board member, Tahira Bakhtiari.

Launching the report, Kirsty McHugh, Chief Executive, Mayor’s Fund for London, said: “Contrary to popular belief, social mobility in London is not sorted. Young Londoners face a unique set of challenges which are often overlooked by national datasets. However, we are a rich city. We can and must do better to support London businesses, charities and public sector create a more co-ordinated ‘cradle to career’ system where young people do not struggle to access jobs that help them live fulfilling lives’.

Debbie Weekes-Bernard, Deputy Mayor for Social Integration, Social Mobility and Community Engagement, said: “Where you come from should have no bearing on what you achieve, yet there are too many young Londoners struggling to access the wealth of opportunities our city offers. The Mayor and I are committed to making London a more equal city and continue to work with businesses, local authorities and civil society groups to dismantle the barriers that prevent young people in our capital reaching their full potential.”

Toby Pittaway, Partner, Oliver Wyman, said: “London’s young people are working harder at school and it shows. But London isn’t yet giving young people all the support they need to realise their potential. This failure is harming our city, splitting it into two worlds. There are many reasons for this; but we believe with stronger purpose, leadership, smarter use of data and sharing of best practice, London can quickly change.”

The Mayor’s Fund for London has today announced that its flagship holiday food programme, Kitchen Social, has delivered close to 1.1m meals, but warns that this figure could skyrocket during the summer break. Over 110 community clubs around the capital have received small grants for good food and holiday activities, aimed at the estimated 400,000

Join us above London’s skyline for our latest event

‘The Power of Work Experience: Good Practise in the Built Environment’ will gather organisations from across the built environment (BE) as they explore what work experience can do for young people – and why it’s an important tool for organisations looking to level-up their future workforce. What’s the venue? The event will take place in

Ahead of this year’s Maths Week London, the Mayor’s Fund for London has worked with generous partners to fund several exciting, inclusive, and innovative maths-based projects at schools across the capital. The Small Grants Scheme, launched earlier in the year, provides grants of up to £250 to London primary and secondary schools. Successful applying schools can