On Monday 13th January 2020, we held the first-ever London Children’s Food Insecurity Summit in partnership with the Food Foundation and the Greater London Authority.

The event put young Londoners at the forefront of food policy issues and explored the barriers and opportunities to protecting children’s nutrition and the actions stakeholders can take to support the agenda.

It also found that half (49%) of parents with children experiencing food insecurity are socially isolated. Sixteen percent of parents from food insecure households reported being unable to provide balanced meals for their children, and 9% said their children did not always have enough to eat. These figures could increase if food prices rise following the UK’s departure from the European Union. “Every child has a right to food, it’s not a privilege” 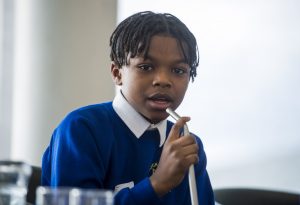 The Mayor’s Fund for London has today announced that its flagship holiday food programme, Kitchen Social, has delivered close to 1.1m meals, but warns that this figure could skyrocket during the summer break. Over 110 community clubs around the capital have received small grants for good food and holiday activities, aimed at the estimated 400,000

Join us above London’s skyline for our latest event

‘The Power of Work Experience: Good Practise in the Built Environment’ will gather organisations from across the built environment (BE) as they explore what work experience can do for young people – and why it’s an important tool for organisations looking to level-up their future workforce. What’s the venue? The event will take place in

Ahead of this year’s Maths Week London, the Mayor’s Fund for London has worked with generous partners to fund several exciting, inclusive, and innovative maths-based projects at schools across the capital. The Small Grants Scheme, launched earlier in the year, provides grants of up to £250 to London primary and secondary schools. Successful applying schools can