Aeropowder – from idea to market 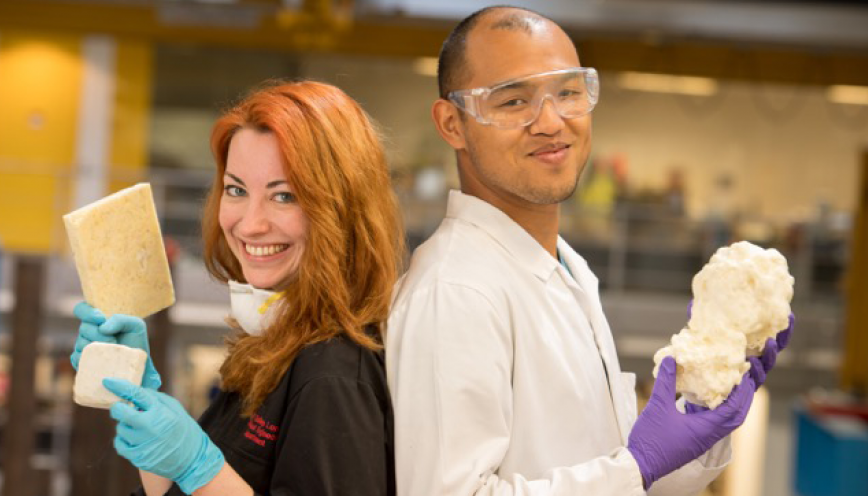 Could feathers be the future of sustainable product design?

Innovation design engineer Elena Dieckmann and biological scientist Ryan Robinson believe so – and set up Battersea based company AEROPOWDER to prove it. Today they employ seven staff and are exploring different global markets. But when they entered the 2016 Mayor’s Entrepreneur competition they just had a bright idea and plenty of determination.

“Without the competition [the company] just wouldn’t exist today – the competition was the first step to give it life.
If we hadn’t entered, I’d probably just have gone on applying for jobs.” says co-founder Ryan.

Their idea was fuelled by feathers produced by the 134 million chickens consumed every day. Normally these natural by-products are thrown away, but the pair saw an opportunity to unlock their potential, transforming them into a high performance insulation textile that could be used as packaging.

“It’s about framing the story of what we were trying to do”, he says. “We practice-pitched events with mentors and
they were like ‘Use this line or say it like this … this is the structure’ – which is helpful. It’s good practice.”

The judges were impressed, and crowned them our 2016 Mayor’s Entrepreneurs. Since then AEROPOWDER has gone from strength to strength, winning accolades and awards from big names like Shell and Innovate UK. Even better, the team has just successfully raised £500,000 through crowdfunding, which will help them scale production. Ryan says that right now his job satisfaction is eight out of ten – but that there’s always room to grow and be better. “Overall I’m quite happy. But I never want to sit and say ‘that’s it, I’m done’. I’m always looking for how I can learn something new. So there’s always room for improvement”

BACK TO MAYOR’S ENTREPRENEUR BLOGS